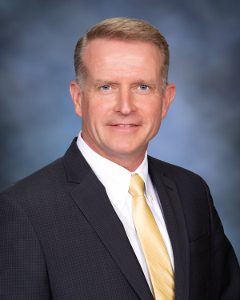 Mr. Austin is a highly experienced commercial litigator and intellectual property lawyer with over 20 years of trial experience focused on helping businesses and individuals defend and protect their patents, trademarks, copyrights and trade secrets. He started his career in the courtroom as a Judge Advocate for the United States Airforce, represented S&P 500 companies at Greenberg Traurig, LLP, for nearly a decade, before joining Weide & Miller, where Mr. Austin has continued to excel in emergency actions to stop infringement and seize infringing materials upon the commencement of an action—often resolving the matter. He has also defended clients from unfair infringement claims often brought by competitors seeking to improperly use the court to limit competition.

Among his many achievements, Mr. Austin secured the seizure of lawn mowers and tractors infringing on Briggs and Stratton’s trademarks and patents at the National Hardware show; prevented importation into the country of knock-off Gibson Les Paul guitars; obtained court orders to seize infringing Cartier watches, Dooney and Burke handbags and the freezing of infringer’s financial accounts; and rebuffed infringement attacks on the “B-Beatle Show,” and “The Rat Pack Is Back” productions, among numerous other successful efforts on behalf of his clients.

In addition, Mr. Austin brings complex commercial litigation and trial experience to the firm, having worked for some of the largest law firms in the country, including Greenberg Traurig and Hale Lane (now Holland and Hart’s Las Vegas office). He even appeared before a Kazakhstan appeals court on behalf of a Nevada oil company in connection with a shareholder dispute.

He began his legal career as a JAG officer of the United States Air Force, at Nellis AFB, Nevada, where he prosecuted and defended military courts martial and prosecuted civilian crimes on federal land before the Nevada U.S. District Court as a Special Assistant United States Attorney. He also defended the Air Force in multi-million dollar wrongful death, personal injury and other claims litigation.

Mr. Austin received his Juris Doctor from Brigham Young University (BYU) in 1995. While in law school, he was a member of the school’s winning Trial Advocacy Competition Team and a Note and Comment Editor for the BYU Journal of Public Law. As a law student, Mr. Austin also worked with then Congressmen Bill Orton on legislation to redress child abuse on Indian lands.

Mr. Austin speaks fluent Korean, the result of over three years of working and living in the country, a second major in the language, and several cooperative education tours as an analyst for the National Security Agency. He helped pave the way for legal clerkships in Korea, securing a rare clerkship at the premier international firm of Kim & Chang as a law student.

He is an avid outdoorsman and a long-time volunteer with the Boy Scouts of America, having served as a Scoutmaster and District Commissioner. Mr. Austin also loves to run. He runs a sub-3 marathon, having completed over 14 races, including the Boston Marathon, and two 50-mile ultra marathons.

Get in Touch
Page load link
Go to Top